God made us: invented us as a man invents an engine. A car is made to run on petrol, and it would not run properly on anything else. Now God designed the human machine to run on Himself. He Himself is the fuel our spirits were designed to feed on. There is no other. That is why it is just no good asking God to make us happy in our own way without bothering about religion. God cannot give us a happiness and peace apart from Himself, because it is not there. There is no such thing.

That is the key to history. Terrific energy is expended – civilizations are built up – excellent institutions devised; but each time something goes wrong. Some fatal flaw always brings the selfish and cruel people to the top and it all slides back into misery and ruin. In fact, the machine conks. It seems to start up all right and runs a few yards, and then it breaks down. They are trying to run it on the wrong juice. That is what Satan has done to us humans.

And what did God do? First of all he left us conscience, the sense of right and wrong: and all through history there have been people trying (some of them very hard) to obey it. None of them ever quite succeeded. Secondly, He sent the human race what I call good dreams: I mean those queer stories scattered all through the heathen religions about a god who dies and comes to life again and, by his death, has somehow given new life to men. Thirdly, He selected one particular people and spent several centuries hammering into their heads the sort of God He was – that there was only one of Him and that He cared about right conduct. Those people were the Jews, and the Old Testament gives an account of the hammering process.

Then comes the real shock. Among these Jews there suddenly turns up a man who goes about talking as if He was God. He claims to forgive sins. He says Has has always existed. He says His is coming to judge the world at the end of time. Now let us get this clear. Among Pantheists, like the Indians, anyone might say that he was a part of God, or one with God: there would be nothing very odd about it. But this man, since he was a Jew, could not mean that kind of God. God, in their language, meant the Being outside the world, who had made it and was infinitely different from anything else. And when you grasped that, you will see that what this man said was, quite simply, the most shocking thing that has ever been uttered by human lips.

One part of the claim tends to slip past us unnoticed because we have heard it so often that we no longer see what it amounts to. I mean the claim to forgive sins: any sins. Now unless the speaker is God, this is really so preposterous as to be comic. We can all understand how a man forgives offences against himself. You tread on my toes and I forgive you, you steal my money and I forgive you. But what should we make of a man, himself unrolled and untrodden on, who announced that he forgave you for treading on other men’s toes and stealing other men’s money? Asinine fatuity is the kindest description we should give of his conduct. Yet this is what Jesus did. He told people that their sins were forgiven, and never waited to consult all the other people whom their sins undoubtedly injured. He unhesitatingly behaved as if He was the party chiefly concerned, the person chiefly offended in all offences. This makes sense only is He really was the God whose laws are broken and whose love is wounded in every sin. In the mouth of any speaker who is not God, these words would imply what I can only regard as a silliness and conceit unrivaled by any the character in history.

Yet (and this is the strange, significant thing) even His enemies, when they read the Gospels, do not usually get the impression of silliness or conceit. Still less do unprejudiced readers. Christ says that He is “humble and meek” and we believe Him; no noticing that, if He were merely a man, humility and meekness are the very last characteristics we could attribute some of His sayings.

I am trying here to prevent anyone saying the really foolish thing people often say about Him: “I’m ready to accept Jesus as a great moral teacher, but I don’t accept His claim to be God.” That is the one thing we must not say. A man who was merely a man and said the sort of things Jesus said would not be a great moral teacher. He would either be a lunatic – on a level with the man who says he is a poached egg – or else he would be the Devil of Hell. You must make your choice. Either this man was, and is, the Son of God: or else a madman or something worse. You can shut Him up for a fool, you can spit on Him and kill Him as a demon; or you can fall at His feet and call Him Lord and God. But let us not come with any patronizing nonsense about His being a great human teacher. He has not left that open to us. He did not intend to. 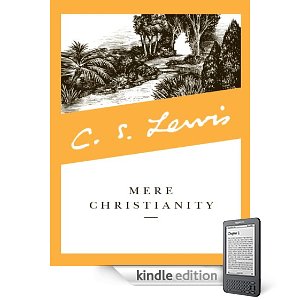 Mere Christianity
is available in print and electronic editions from Amazon.com